Tom, Scott, Mike, and Don went on their annual Brotherhood of the Trout fishing trip from August 13-19. Since Tom had to go back to work by the 22nd, they made the trip just in time. As they have for a few years, they fished and hiked Mono Creek, getting themselves and their gear across Edison lake via a ferry. This year, however, the lake level was much lower than normal because it had been used to fill the lower lakes. (The tree stumps in this picture are normally under water.) 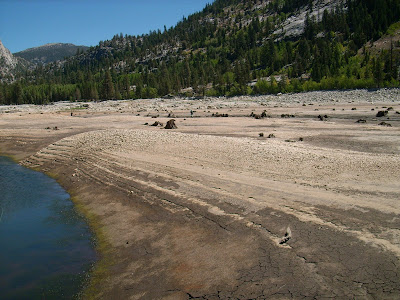 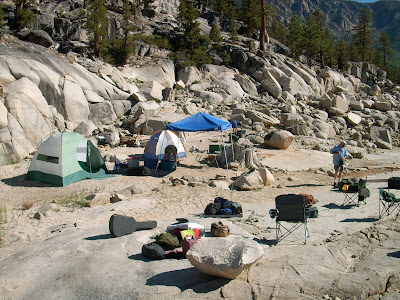 Since the ferry couldn't take them as far as they have gone in the past, they weren't able to setup camp where they had planned and actually camped on the lakebed. In spite of that, they had a great time and hiked up to some beautiful fishing spots - as Tom's picture of Scott proves! 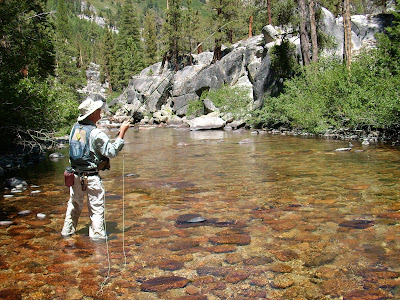 Tom has finally gotten used to digital photography so didn't hold back to save film or experiment with exposures and angles. Click on this posting's title to see more of his photos from that trip.
Posted by Renata at Sunday, August 19, 2007

I have been visiting Lake Edison both from the JMT and Kaiser Pass for over 8 years. I was there the last weekend in July 07 and just returned from a longer weekend over Labor day. The lake had dropped at least 30 feet in just a month. The lake volume is down 80%. This is significant only in that the lake drops from 100,000 acres of volume in July to around 35K in January or 35%. In August, 6 months shy of the low volume date, the lake is currently at 20%. Very sad. These pictures do not depict the devastation you see when visiting. Still I was able to kayak around for hours and enjoy views from the lakeshore that were otherwise unreachable at full capacity. The owner of VVM expects the lake to be reduced to a puddle by the end of the season.