(Don't forget you can enlarge pictures by clicking on them.) 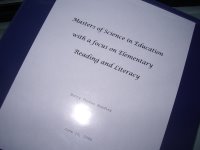 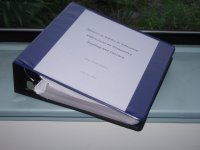 After two years of Tuesday classes and many late nights of writing papers and fretting, Tom completed the last step toward his Masters degree. Naturally, our computer had been acting up for months and tried to die on him at least three times last week. I was able to resurrect it and copy his latest files onto a CD and Tom borrowed Jack's printer to print several needed pages. By the third "resurrection", however, we decided it was time to buy a new computer (yes!) and I spent most of Sunday afternoon and evening setting it up and updating programs and files. By 1 AM, I gave up and told Tom I was going to bed and he would have to finish printing his files by himself. He woke me up to say he was just about done and I told him he should take a picture of the portfolio before shipping it out in the morning.

I've used the camera's self-timer plenty of times, so if it had been me, I'd have taken my own picture. But Tom didn't think of that, so he woke me up at 2:17 to show me his finished product. Here's the picture I took of the happy man - the angle is weird because I didn't bother to get up out of bed ;-) 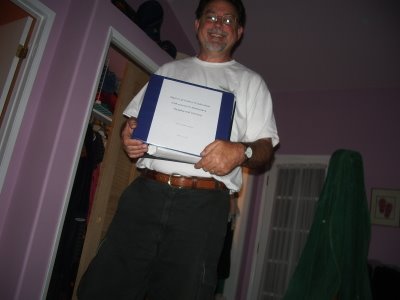