Venus, Jupiter, and the Crescent Moon

I shot these photos from our balcony on Sunday. There was too much light around to really show the crescent of the moon, but it helped when I shot from behind the curtain. Too bad the double-paned windows created some "echos" because as NPR and The Manila Times stated, depending on where you were on the globe, some people could see a "smiley face" and other people saw a "frowny face".: 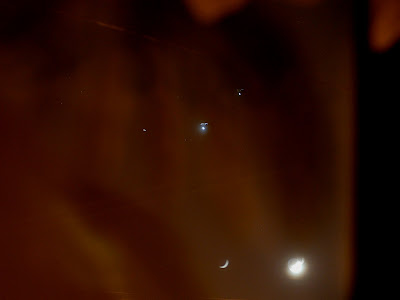 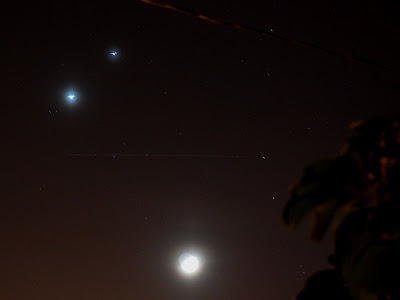 This article by AP Science Writer, Seth Borenstein - published Tue Nov 25, 4:21 pm ET - put me on notice to look in the sky yesterday. I was so busy and tired after the Alternative Christmas Faire, it took a phone call from Tom (who almost always works in his classroom on Sunday evenings) to tell me to look at the sky Sunday around 6pm.

(Quoting from Yahoo! News):
It's not just families that are getting together this Thanksgiving week. The three brightest objects in the night sky — Venus, Jupiter and a crescent moon — will crowd around each other for an unusual group shot.

Starting Thanksgiving evening, Jupiter and Venus will begin moving closer so that by Sunday and Monday, they will appear 2 degrees apart, which is about a finger width held out at arm's length, said Alan MacRobert, senior editor at Sky and Telescope magazine. Then on Monday night, they will be joined by a crescent moon right next to them, he said.

Look in the southwestern sky around twilight — no telescope or binoculars needed. The show will even be visible in cities if it's a clear night.

"It'll be a head-turner," MacRobert said. "This certainly is an unusual coincidence for the crescent moon to be right there in the days when they are going to be closest together."

The three celestial objects come together from time to time, but often they are too close to the sun or unite at a time when they aren't so visible. The next time the three will be as close and visible as this week will be Nov. 18, 2052, according to Jack Horkheimer, director of the Miami Space Transit Planetarium.

I took the rest of these yesterday after work - before the moon and planets set into the fogbank that has been hanging out in the area for over a week: 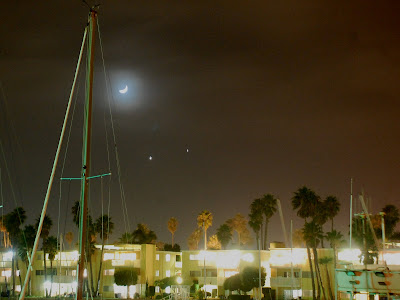 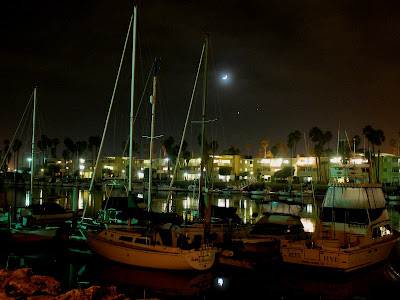 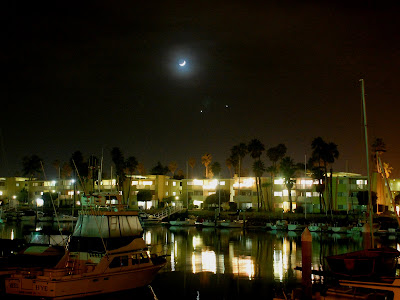 (If you click on the photos, you'll see bigger versions) 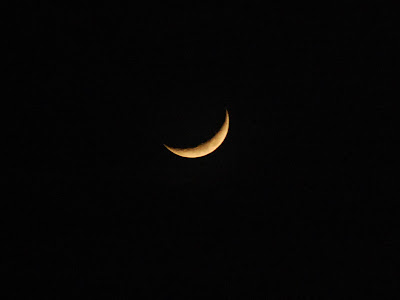 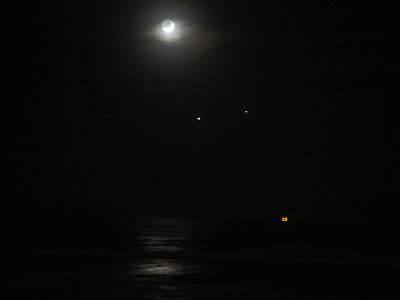 I took this last one from Oxnard Shores. It was pretty dark but you can see the moonlight on the water and that light on the horizon is an oil platform.
Posted by Renata at Tuesday, December 02, 2008